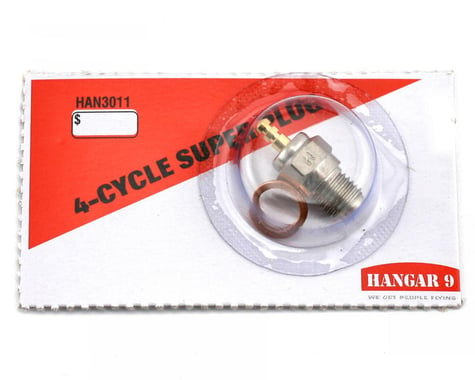 This is the Hangar 9 4-cycle super plug. Selecting the right glow plug for your four-cycle can make the difference between an engine that runs reliably sweet with perfect tick-over-idle or constant dead sticks. Glow plugs are especially critical in four-cycle because the element is re-energized with heat only every other cycle, and the cool air fuel mixture enters the combustion chamber right next to the plug, trying to extinguish it. So far the O.S. F plug has dominated the four-cycle scene. Hangar 9 is offering a Four-Cycle Plug that equals the performance of the leading plug, but at a fraction of the price.

Hangar 9's Four-Cycle Super Plug features a heavy-duty .008" platinum alloy element and extended "hose nose" tip that extends into the combustion chamber, isolating the element from the cool air/fuel mixture. Our R&D staff have been using the new Hangar 9 Plug in several four-cycle applications, including inverted mounted Saito .91s, multi-cylinders, and two Saito 1.80s. We've done direct comparisons with the leading four-cycle plug and found that in all applications, the Hangar 9 gave equal idle and transition performance. And with over 35 test flights to date, we're sold on the reliability and performance and the ability to stay lit under tough conditions. Keep the heat on with Hangar 9's Four-Cycle Super Plug.

This product was added to our catalog on November 3, 2006