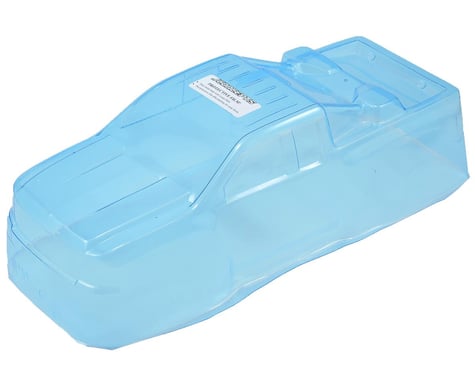 This is the JConcepts lluzion 2012 Chevy 1500 Body for the Traxxas Rustler XL-5.

No matter where you are, you don’t have to look far to see a Chevy Silverado on the job. JConcepts nd Chevy Silverado - work hard, play hard. Like a rock. Never one to relax, JConcepts s pleased to introduce their 2012 Chevy Silverado 1500 body for the Traxxas Rustler. Starting with its beefy fenders, low-profile design, and noteworthy Silverado appearance, the 1500 body was inspired by the looks of a class leading full-size pick-up, loaded with performance features. Fitting directly on the popular Traxxas Rustler line of vehicles, the Chevy 1500 is just what you have been looking for.

The JConcepts ody is a racer starting with the slammed look and blended 1:1 inspired appearance. The Chevy 1500 pops out as a high-voltage performer and packs in the detailed design you have come to expect and appreciate from JConcepts. The rear bed has built-in clearance for the Rustler shock tower and shocks to help maintain that sleek appearance. Extruded front and rear fender flares for maximum tire and linkage clearance include a slight hood-scoop raised portion to bulk up the front-end. The body comes with a spoiler on the back of the body mold and can be detailed and trimmed to drop right on the rear and secured with 2 included JConcepts utton head screws.

The head-light and grill treatment scream Chevrolet while the decal package helps the bow-tie truck standout from the competition. Whether you start your day on the race track or in the back-yard, the Silverado packs a serious punch straight out of the package. The Chevy Silverado Runs Deep.

This product was added to our catalog on February 8, 2013