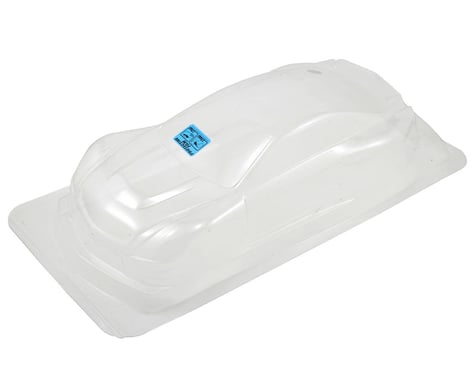 This item earns up to 30 VIP Reward Points Learn More

This is a Cadillac ATS-V.R clear race body for 200mm Pan Cars and Touring Cars from Pro-Line. After widespread demand, PROTOform has converted the popular Cadillac ATS-V.R race body into a 200mm version. The Cadillac ATs-V.R was seen for the first time in 190mm USGT racing spec, and now it's specced for the new World GT-R rubber tire pan car class or 200mm Touring Cars.

Cadillac Racing has charged back into the spotlight with their factory-works ATS-V.R race car, the third generation of V-series race cars. Built using international FIA GT3 specifications, this pedigree has the potential to let it run in more than 30 different GT series around the world. The ATS-V.T has become a proven success in the hands of top drivers like Johnny O-Connell and Andy Pilgrim who have scored overall wins and pole positions in the World Challenge series.

PROTOform proudly brings the racing heritage of Cadillac back into the 1/10 RC racing world with their officially licensed rendition of the Cadillac ATS-V.R. With every detail for the full-scale race car captured and an extensive decal sheet, racers will be able to truly appreciate the ultra-realistic appearance. This 2-door coupe race body has been formed using genuine .030" lexan and includes injection-molded wing struts. As always, wing mounting hardware and a paint-then-peel overspray film are included.

This product was added to our catalog on September 15, 2016