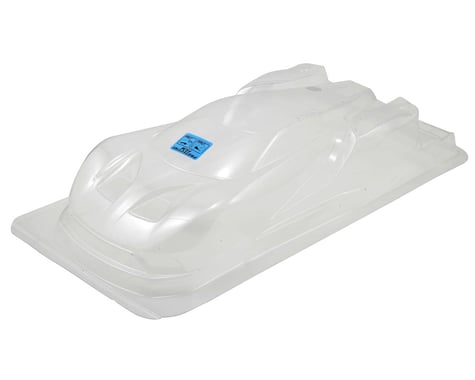 This is a Pro-Line Ford GT clear body for 200mm Pan Cars. Simply put: the 2017 Ford GT is one of the coolest street cars ever designed, and PROTOform is proud to bring it to 1:10 RC Racing.

From the ultra-low stance, to the teardrop-shaped cockpit, to the never-before-seen b-pillar “side wings”, the Ford GT is the ultimate expression of form following function. PROTOform has captured every detail of this mid-engine sportscar that captured the GTE Pro class win at the 2016 24h of Le Mans.

Note: This is sold as a clear and unpainted body. Image of the painted body is only to display details. No vehicle chassis is included with this product.

This product was added to our catalog on October 7, 2016

Eric Marrison
Verified Owner
Protoform Ford GT 200mm Pan Car Body (Clear)
I really like this body, it looks great. I wish there were more stickers to match the Le Mans GTE car and there are some really distracting marks molded into the flying buttresses for screws but other than that it's a nice body. Once its assembled (meaning the rear spoiler and flying buttresses are mounted) it feels pretty stiff for a 1/10 scale TC body.
View all reviews (1)
Related Products
Customers also purchased...
Contact Us
1-866-787-5487
Live Chat