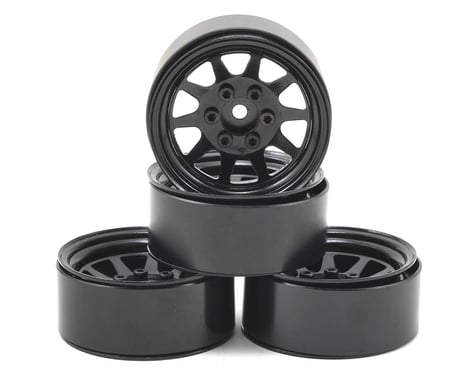 This is a set of RC4WD OEM Black Stamped Steel 1.9 Beadlock Wheels.

This product was added to our catalog on September 16, 2016

Jef VanZile
Verified Owner
RC4WD OEM Stamped Steel 1.9 Beadlock Wheel (Black) (4)
I bought these to mount on some Proline Hyrax tires, and use on a TRX-4 Sport. I wanted some steel beadlock wheels that I could add sticky wheel weights inside (these are not compatible with the weights) but thought $100-$120 was too much to spend on wheels. This is my second RC4WD product I've purchased (also a 2001 Taco Lexan body kit for crawler) and I have equal feelings for both products - which is woulda been 5 stars with better instructions.
These wheels come in a plastic sleeve package, assembled, and with a very small bag containing 2 extra lug nuts. You can't tell by looking at the pictures or reading the description, but these are 4 piece wheels. I'm not sure of the actual names of each part, so for sake of this review I'll call them:
Barrel - outer most ring of the wheel
Wheel Face - the part of the wheel that you see when mounted on the vehicle
Back of wheel - matching part of the face that connects from the other side of the Barrel.
Rear Hub - this piece holds the Face and Back of wheel together, and also where the wheel connects to the axle.