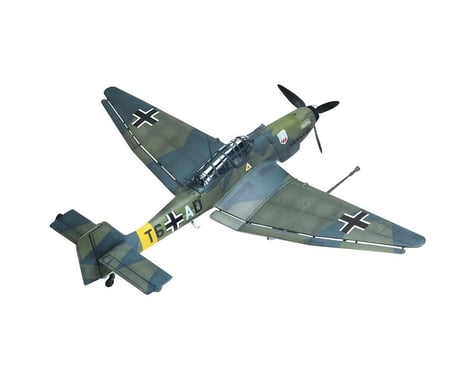 Note: Manufacturer does not allow coupons
This item earns up to 16 VIP Reward Points Learn More

This is a 1:48 scale Stuka Dive Bomber Ju87G-1 model from Revell. The Junkers Ju 87 was a German dive bomber and ground-attack aircraft designed by German aerospace engineer Hermann Pohlmann and flown for the first time in 1935 and first appeared in combat in 1937 with the Luftwaffe's Condor Legion during the Spanish Civil War. The Ju 87 experienced considerable success during the onset of the Second World War in close air support and anti-shipping roles. It quickly became less effective, requiring heavy fighter escorts during the Battle of Britain onwards. Germany quickly began producing new variants to meet the rapidly changing demands of air combat and eventually the Ju 87 G variant was produced, repurposing the aging airframe of the Ju 87 as an anti-tank aircraft as a response to the onslaught of Soviet tanks on the Eastern Front.

The G variant received an upgraded Junkers Jumo 211J power plant, two 37mm (1.46 in) cannons mounted in underwing gun pods and armed with armor-piercing tungsten carbide rounds, and a direct copy of the Ilyushin II-2 Sturmoviks armored protection to prepare it for low-altitude attacks. With these upgrades, the G-1 performed spectacularly in the hands of Stuka aces, and D-series airframes were quickly converted to the G-1, keeping the smaller wing, but without the dive brakes. Soon after, Germany lost the war and the Ju87G-1 was retired from service. Thanks to Revell, this historic aircraft isn't lost to time and you can assemble your very own Stuka Dive Bomber Ju87G-1 to relive history!

This product was added to our catalog on January 11, 2020