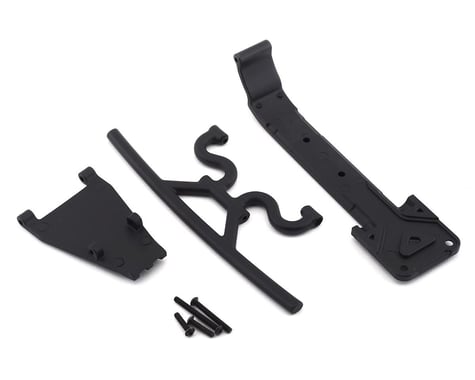 This is an RPM RC Front Skid Plate in Black for the Traxxas Unlimited Desert Racer. RPM's version is a three-piece design that is much easier to maintain than the original. If you need access to your A-arms for maintenance or replacement, far fewer screws need to be removed to get to them since you won't have to remove the entire skid plate. The lower portions of the skid plate can even be accessed without removing the body!

RPM has incorporated an upper compression zone on the bumper portion of the skid plate that allows a moderate amount of flex during frontal impacts. This compression zone absorbs significantly more impact energy than stock, reducing the possibility of internal damage from head-on crashes.

The RPM UDR replacement skid plate is stronger and backed by a limited lifetime warranty against breakage so there's a significantly lower chance you'll need to replace it due to an "oops" moment. The RPM version has a larger front radius to help ease transitions up and over tall obstacles, unlike stock that has a steep front angle with minimal roll to the front edge. RPM skid plate also has three skid ribs that will help absorb abrasion damage, adding to the longevity of the RPM skid plate.

This product was added to our catalog on December 12, 2018