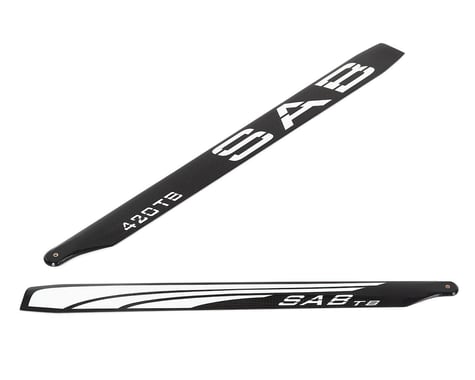 Out Of Stock Online
You may back order this item and it will ship when it arrives.
$3.99 flat rate shipping! Learn More
Back Order

Save In List
Write the first review
Note: Manufacturer does not allow coupons
This item earns up to 54 VIP Reward Points Learn More

SAB 420mm Thunderbolt TBS Carbon Fiber Main Blades were developed to increase the performance of your Goblin 420 and other 420 class helicopters. The design was developed not only for an aesthetic improvement, but also to improve the visibility of the tip of the rotor to make the blades easier to see during low maneuvers. The variable profile along the radius of the rotor makes the "SAB Thunderbolt TBS Blades" 20% more efficient in comparison to the "SAB Black Line" blades, while improving stability to the machine without compromising the agility of the rotor.

The chord varies along the radius of rotor (shorter at the root, larger at tip); The aerodynamics of the rotor creates more thrust exactly where the rotor generates it, allowing harder and more precise maneuvers in flight. To improve the stiffness "Thunderbolt Blades" include a double layer of uni-directional carbon fiber. Additionally SAB has added a steel safety wire along side the leading edge of the blade to help increase safety in the event of a crash.