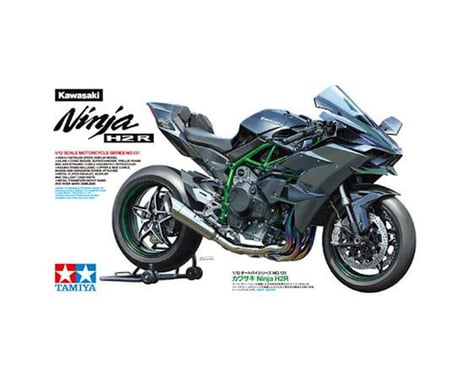 Note: Manufacturer does not allow coupons
This item earns up to 44 VIP Reward Points Learn More

This is a 1/12 scale model Kawasaki Ninja H2R from Tamiya. This scale model recreates a track-only monster that the ever famous Japanese manufacturer announced in 2015. The Ninja H2r was developed using input from many of the companies in the Kawasaki Heavy Industry group, and its name is a composite of two legendary Kawasaki bikes: the famed Ninja and H2R. The Ninja H2R not only looks fantastic with the balanced bare carbon fiber and exquisite mirrored finish black chrome parts, it also has out-of-this-world specs. It pushed out a hair-raising 300+ horsepower from its supercharged 998cc inline-4, which means you'll have unbeatable acceleration. It also comes packed to the brim with up-to-date electronics for the track including traction control, engine brake control, and more!

This product was added to our catalog on February 20, 2018