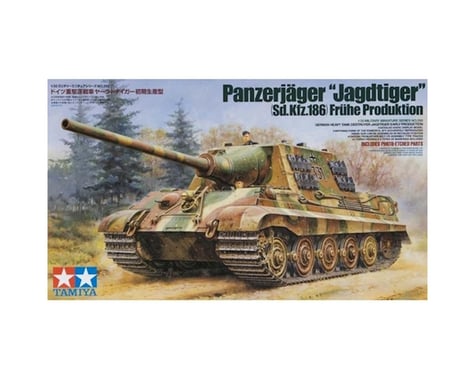 This item earns up to 64 VIP Reward Points Learn More

During the later stages of WWII, the heavy tank destroyer Jadgtiger (which weighed in excess of 70 tons and had an impressive 12.8cm gun and thick armor) was the heaviest tank seen on both the eastern and western fronts. Tamiya is releasing this 1/35 scale Jagdtiger after its first release 33 years ago in commemoration of the 40th year anniversary of the 1/35 Military Miniature series. Lining this Jagdtiger up with other 1/35 scale tanks like the German King Tiger Production Turret (35164), German King Tiger Porsche Turret (35169), German Tank Destroyer Jagdpanther Late Version (35203), German King Tiger (Ardennes Front) (35252), and German Tank Destroyer Hetzer Mid Production (35285) would make for an imposing display.