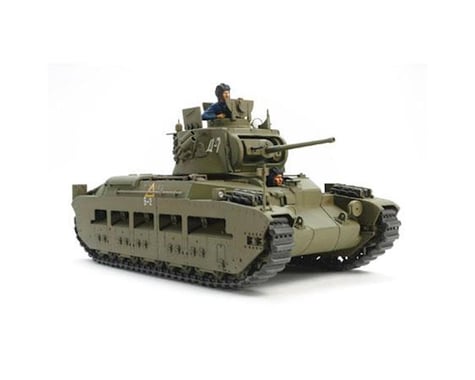 Discontinued Online
Write the first review
This item is discontinued and no longer available for purchase. You may want to search our site for a similar item.
Note: Manufacturer does not allow coupons

This is the 1/35 Matilda infantry tank Mk.III/IV Red Army model from Tamiya. This kit updates the popular British Matilda (Item 35300) with parts to recreate a Soviet-spec Matilda. The tank itself was a durable, heavy design with a 2-pounder gun that was well-suited to the slower infantry tank role in British armor doctrine. Eventually, the Matilda was replaced by the Valentine. Like the Valentine, it was supplied to Soviet forces under a lend-lease scheme. Around 1,000 were provided; they were generally given new tracks and simplified suspension with bogie skids, redesigned side skirts, and other modifications.

This product was added to our catalog on February 4, 2017